In the north of the country the Andes form the highest coastal mountains of the world, the Sierra Nevada de Santa Marta with the highest mountains in Colombia. They are the Pico Cristóbal Colón and the Pico Simón Bolívar. Both peaks are enthroned majestically at 5,775 m above sea level. 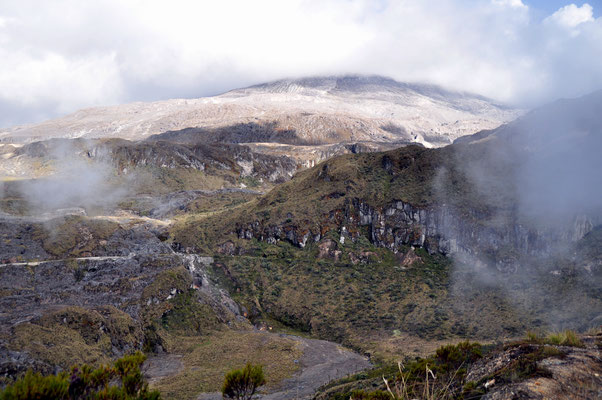 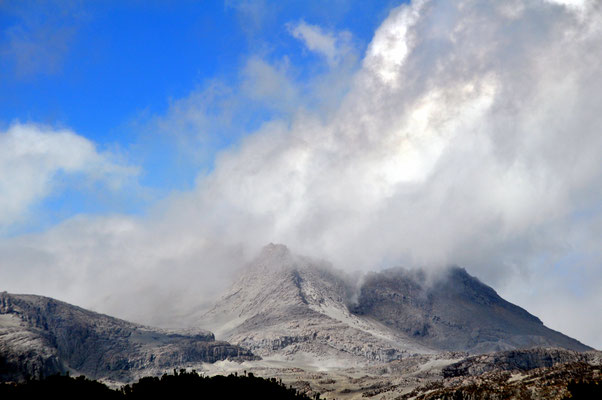 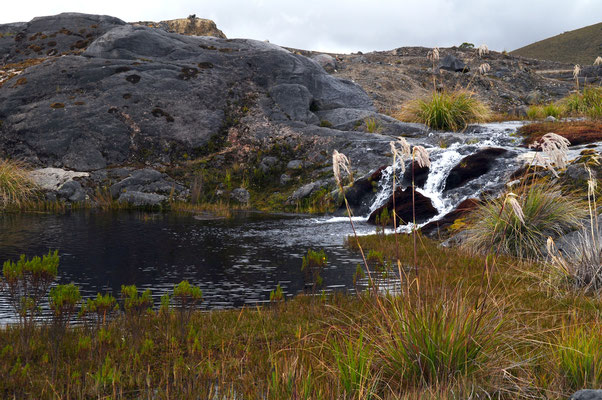 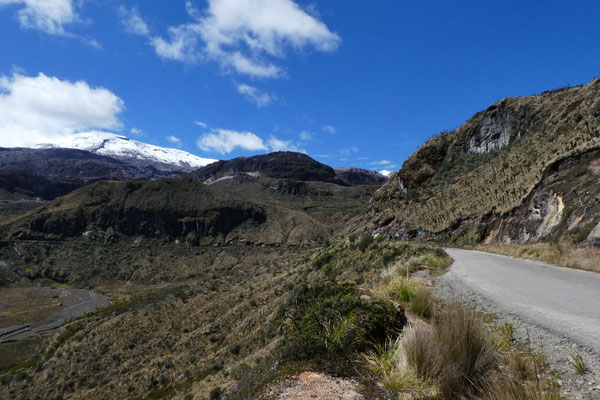 The eastern Andean cordillera includes Bogotá and continues northeast to the headland of the Guajira Desert.

Here in the coffee region is the second highest active volcano in the northern hemisphere - the Nevado del Ruíz. It is also the most famous volcano in Colombia. The reason for the volcanism in this region is the submergence of the oceanic Nazca plate, which moves in a northeasterly direction, under the continental South American plate, which moves to the northwest. As a result, earthquakes and active volcanism repeatedly occur on the western edge of the continent.

The Nevado del Ruíz lies only about 500 km north of the equator and, despite its height, is covered by a 25 square kilometre cap of ice and snow. The glacier surface of the Nevado is approximately 9 km², but the glaciers are beginning to melt due to climate change.

Based on rock and soil samples, the oldest eruption of the volcano is dated to 4,660 years BC. After the conquest of South America by the Spaniards, the first eruption from the year 1570 has been preserved.

The volcano caused a worldwide sensation with its eruption on 13 November 1985. Hours later, its mudslide overran the town of Armero, 47 km away, burying more than 5,000 buildings and more than 22,000 dead.

Since April 2012, the Nevado del Ruiz has been showing increased activity again. After a series of earthquakes, the volcano began to emit ash again at the end of May 2012. 1,500 people were evacuated as a precaution. Less than a month later, at the end of June 2012, the Nevado del Ruiz erupted and spewed an 8 kilometer high ash cloud into the sky. Fortunately, there were no major damages or even personal injuries.

Due to the permanent activities of the volcano, the park to the summit of Nevado has been closed since last year. But one can do a tour up to a height of 4.130 m to the entrance of the reserve. This altitude is easily reached by car.

Small exploring tours in this area up to an altitude of approx. 4,300 m are still allowed. With much luck, one can see from a Mirador from the summit of Nevado with its 5.400 m. Spectacular surely, when it suddenly appears out of nowhere from the wall of fog and presents itself in its true beauty including smoke column.

But it is not only at this altitude that there are spectacular moments. Below the park entrance you can observe majestic and impressive landscapes. We encounter a wonderful ecological reserve. Because of the proximity to the equator we still encounter plants and animals at this altitude. It is the home of a flora and fauna that is unique in the world, in which the magnificent Nevado del Ruiz rises, also known as Páramo. The vegetation form of the tropics from 3200 - 4800 m is called Páramo in South America. There are about 42 plant species to be discovered alone, which can only be found in this area in Colombia. This landscape up there is also lovingly described by the Colombians as "de otro planeta" as one of another planet. It is definitely a "different world" at this altitude.

Trekking tours in the Parque Nacional Nevado del Ruíz are possible over several days. Because with all the grandiosen beauty of the Nevado one should not forget its two "sister volcanoes", the Tolima and Santa Isabel, which stand relatively close together. The tours of several days are only possible with local Guías and require best condition and very good outdoor experience.

Our Nevado tour starts early in the morning because of the weather conditions. Around 06.30 am we leave Pereira in the direction of Manizales. We master an altitude difference of over 2,600 m within 2.5 hours.

There are always stops on the way. Once to enjoy the magnificent landscape and to follow the recommendations of the local Guias. We drink a lot of mineral water and a Coca tea with Panela, which positively influences the adaptation to the altitude, at a stop at 3400 m. We have a drink at the hotel.

And with a little luck we can see the Andes condor flying!