It is called the "river of five colours" and for many it is the most beautiful, or at least the most colourful river in the world. We are talking about Caño Cristales. In the heart of Colombia and embedded in the mountain range La Macarena lies this natural wonder. In the second half of the year, the blooming algae (Macarenia clavigera) make this river shimmer in all the colours of the rainbow. But the department Meta is far away from good infrastructure and civilization, so that a visit is not so easy to realize or is connected with a high expenditure of time and money.

Here we see a similar picture as in Caño Cristales. But here, the reddish colour is not produced by algae, but the iron oxides in the rocks make the river shimmer red. This has the advantage that one can enjoy the play of colours all year round. The colours appear clearer when there has been no rain for a few days. Bizarre hollows in the rocky riverbed are used as jacuzzis. The hollows can reach 2 to 6 meters and serve wonderfully to sit comfortably inside and enjoy the crystalline water. According to geologists, these formations were formed thousands of years ago by increased volcanic activity. The tectonic plate shift within the northern canyon Chicamocha is also responsible for this. In this stone river bed we find more than 100 of these craters. A bizarre picture, a moon landscape enriched with vegetation and water, almost not of this world. 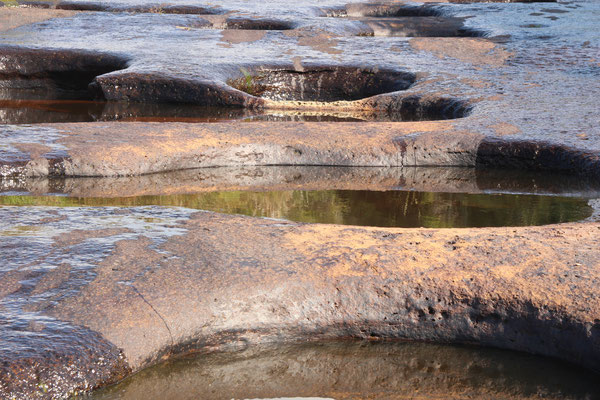 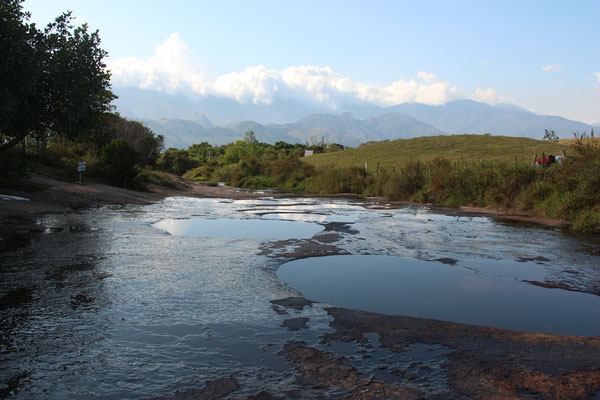 And this is not the only feast for the eyes in the surroundings of Guadalupe. For further explorations there are rivers, waterfalls and caves such as the "Salto La Llanera" or the caves "Perico" and "Indio". Only to go for a walk in the vicinity of the village, with the view of the Andes cordilleras, is it worthwhile to make this excursion. The cultural centre and the main church of Guadalupe are also worth a visit.

On a small scale, these hollows gained popularity due to their rarity. It cannot be denied that this magical place and its landscape has a special effect on us due to its calm, only interrupted by the chirping of birds and the mooing of the cows.